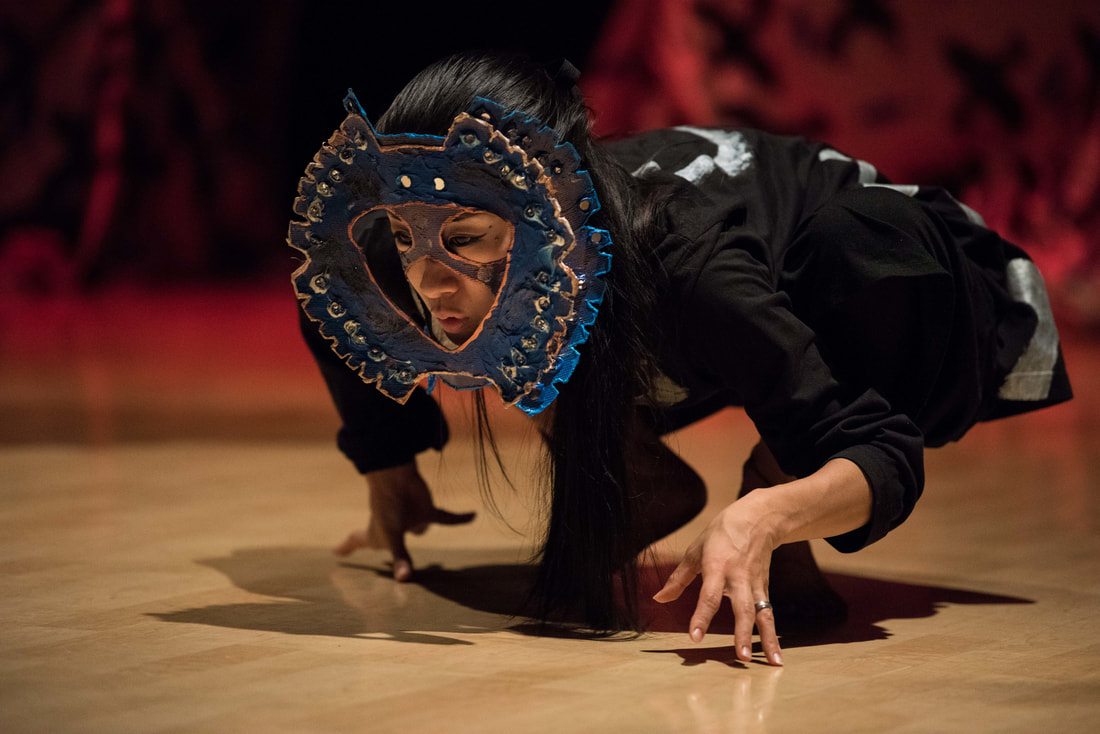 Chihiro in one of the poses characteristic of her movements and "non-movements," wearing an Astrologo mask
​Dance is my silent speech.
It is moving meditation.

I interpret and deliver the message of your one creator through movement of my body and energy.

Birds sing to find their lovers. Bees dance to communicate. Trees strike poses around dirt, earth and rocks. Cats are born with unique patterns on their coats that are made of spontaneous genetic interaction.
It's all written in the stars.
As I gaze at the moon, I feel the gravity that unleashes me to swim in the sky.
Art is the most ancient language. I speak up. I communicate.

Below, Collaboration in motion: Chihiro is spinning Amir's Lunar Phase Umbrella to JD's bells - please wait a few moments for the JD's bells to play.
After viewing the gifs and the music below, scroll down for a slide show from her recent Elevated Moon performance!

Born and raised in Yokohama Japan, Chihiro ‘Cute-Beat’ met Hip-Hop culture when she was in elementary school. Her interest and passion kept growing as she listened to both American and Japanese Hip-Hop music. To express her love and respect to the culture she started dancing.

While going to Aoyama Gakuin University she started performing at many clubs and venues mainly in Yokohama and Tokyo. She also choreographed and performed for R&B / POP singer SIKI.
After graduating in 2008 she established her own dance class / group ‘dance-AHO-lic’. From kids to grown ups, she brought joy and smile to many students through dancing. Also she had appeared on pod-cast TV shows and performed at different venues such as community festivals and summer stages in zoos.

In 2011, to study more of dancing, performing arts and Hip-Hop culture, she came to New York. While attending a year-long certificate program at Broadway Dance Center, she had Future (E.O.F.) as a mentor and after finishing the program she kept following his ‘ZEN-CHI’ Waving concept and has since stayed in NYC. She has taught his Waving class as a substitute teacher and run E.O.F. all styles dance sessions at PMT dance studio; when he teaches to Japanese students she assists as translator.

While staying in New York she was introduced to the night clubs and partiers of New York City. She entered Waacktopia’s first ever Waacking / Experimental Dance Battle event. She became their first winner in the Experimental category. In 2014 she placed first in House Dance International Experimental category. The next year, she won the same championship again. In 2017 she won the championship for the third time.
​
Since 2012, She has been trained by and performed with Akim Funk Buddha who has experienced many different cultural, music, and dance forms. Under Akim’s direction she has disciplined her original experimental dance style which is based on Hip-Hop and urban style combined with multiple traditional dance forms: Classical Ballet, African (Zimbabwean and South African), Japanese and Balinese. Through creating new pieces with Akim such as; "Water" and "Dying Swan" (a Hip-Hop version), she has become Akim’s associate director and also principal dancer. She performed and played important rolls at Akim’s shows at The Blue Note, BAMcafe, Brooklyn Botanic Garden’s Sakura Matsuri, Dance Parade NYC, New York Summer Stage, Okeechobee music Festival, and Kennedy Center.